So it's been a while, and I am not gonna make excuses so I will just move on to the main meat of the post.

I am jumping into the CuteGamerCouple twitch streaming channel with both feet! 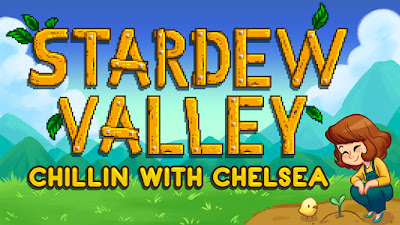 You can also see my Chillin' With Chelsea show on YouTube.

Ryan and I are planning a lot of things for CGC on YouTube and Twitch, one being an art show! I will let you know as soon as we get that up and running.

Now for some much needed arts! I took on the Wild West Challenge for Art Station.

Sit back and enjoy the tale I'm about to spin for you. Hope this is as much as a treat for you as it is for me.

"Welcome to Pastry Plains, the sweetest land you'll ever lay eyes on. Watch the Cotton Candy Clouds roll by the Frosted Mountains. The Swedish fish play in the Sarsaparilla Spring, and there is a plethora of tasty morsels to find in the Bubblegum Hills. Be careful you don't get stuck in the Molasses Marsh, and watch out for the wild gummy bears in the Candy Cane Forest - they pack a mean wallop!"

"What kind of folks would live in a delectable delight like Pastry Plains? Only the kind that can muster enough sugar to carry their own weight. Tread carefully though, as looks can be deceiving. Some aren't as sweet as they look. They can be downright sour! Don't let that put you off though. Why, there are folks here that are so sweet, they'd give you a cavity just looking at you. So come on down to Pastry Plains and see what kind of treats are in store for you today!" 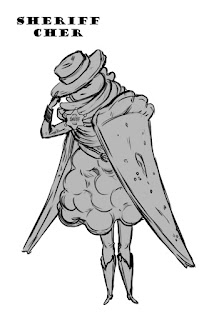 "Sheriff Cher has upheld the law in Pastry Plains with the help of Deputy Duncan since Bakers Dozen County was first established. Lately the Sugar Rush has brought folks from all over and she's been having a harder time keeping up with the crime rates, especially with Sticky Fingers and Petit Pâtisserie on the loose. That won't stop her. She's going to make sure that justice is brought to those outlaws." 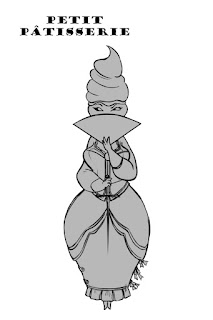 “Many folk roll into Pastry Plains from time to time and while most are seeking their fortune or to set up their new life, some have darker motives. Petit Pâtisserie arrived in Pastry Plains from Paris earlier this year, and this sweet treat is hiding something bitter behind that chocolate fan of hers. Some prominent business folk have been mysteriously disappearing ever since she arrived in town, along with their large sugar fortunes. Miss Pâtisserie’s wit isn’t the only sharpness she carries with her. You’d better watch out for this dainty delicacy! Sheriff Cher has been keeping a close eye on Miss Pâtisserie, but has yet to be able to prove anything. She’s a crafty little cake!” 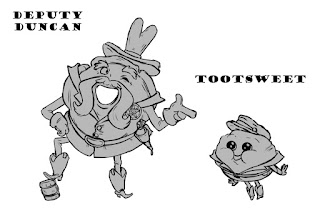 "The title of Deputy has been proudly passed down in the Duncan family. In fact, it’s such a privilege to the Duncan family, that Deputy Duncan’s first name is Deputy. Deputy Deputy Duncan may not be the best at what he does, but that doesn’t stop him from telling everyone in town that he is. In fact, Sheriff Cher tends to do most of the work while Duncan drinks his sarsaparilla in the saloon and tells his nephew Tootsweet for the 100th time about that one time he almost caught the notorious sugar bandit, Sticky Fingers. This crusty cake may be a bit dry, but he’ll do his best to protect the people of Pastry Plains!"

"Tootsweet is a young lad who wants nothing more than to be a lawpastry. His dad, Chief Bearclaw, thinks he should learn the ways of the Sigaigan AND study his readin’ and writin’, but that’s boring! He just wants to shoot bad guys and catch ‘em like his awesome Uncle Deputy Duncan! His uncle is the coolest pastry out there! Toot could listen for hours about all the times Uncle Duncan almost caught the notorious bandit Sticky Fingers. He can’t believe that old stale bun keeps getting away! Uh oh… that sounds like Poppa Bearclaw! Wasn’t Toot supposed to be studying? Oh lemon drops!" 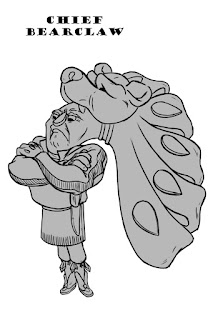 "As the chief of the Sigaigan tribe in Pastry Plains, Bearclaw is certainly no soft pastry. He gets his name from his exploits as a young man, when he hunted down the biggest, fiercest gummy bear in the Candy Cane forest to protect his tribe and the town. He’s got a thick tough crust, but deep down he has a sweet tooth for his wife Mama Maple and his three children: Toot Sweet, Cream Puff, and Little John. Between leading his tribe and taking care of his family, it’s been hard to juggle so many responsibilities. Bearclaw is worried that Tootsweet’s been spending too much time around Mother Maple’s brother, Deputy Duncan. Tootsweet loves his Uncle Duncan, but Bearclaw isn’t happy with Deputy filling Toot’s head with sweet nothings." 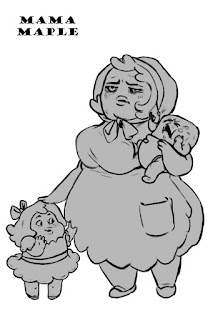 "Mama Maple is exhausted. The mother of three rambunctious pastries – Toot Sweet, Cream Puff, and Little John – she’s constantly fighting an uphill battle. Maple is married to Chief Bearclaw, and while she loves him and knows that he’s got his own hands full leading the Sigaigan tribe, she wishes he could help out more around the house. Keeping three little hyperactive sugar-soaked tots fed, educated, and happy is job enough on its own, but some days are harder than others. Little John, her youngest, is teething and cranky constantly. Cream Puff, her curious little girl, asks endless questions day in and day out. Toot Sweet, her oldest boy, is off again somewhere with her no-good brother Deputy and – oh no, does that smell like jelly? Looks like Little John’s diaper needs to be changed… again." 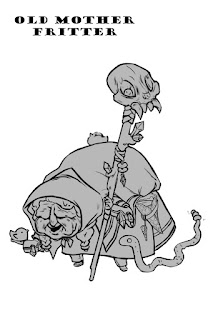 "Old Mother Fritter is the oldest resident of Pastry Plains. She’s the Elder of the Sigaigan tribe, led by Chief Bear Claw. She’s not really one for town, though. You can usually find her wandering the Molasses Marsh looking for gumdrops or tending to the peeps and gummy rattlers in the Candy Cane Forest. She’s a bit of an acquired taste, but the residents of Pastry Plains know that she’s one of the wisest pastries around and her advice should always be followed (even if it doesn’t make much sense). While she doesn’t have any family of her own, she treats all the townsfolk as if they were her children – for better or worse. No one will forget the time she spanked Deputy Duncan in the town square for eating his dessert before dinner." 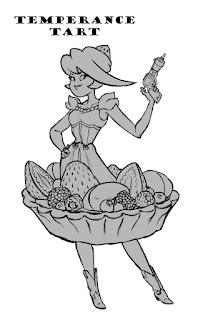 "Temperance Tart was lured to Pastry Plains by the sweet temptation of the Sugar Rush. This tangy tart is a crack-shot gunslinger who’s seeking fortune and adventure. She’s looking to find work as a gun-for-hire for a rich sugar baron. There’s just one thing standing in her way - she’s so hot-headed you’d think she was cinnamon-filled. Why, just last week Sheriff Cher had to break up four fights in the saloon that Temperance started – and one was just over spilt milk! Cher had been thinking about hiring Temperance for some help keeping the law in the town, but she’s worried that Temperance won’t be able to keep her temper." 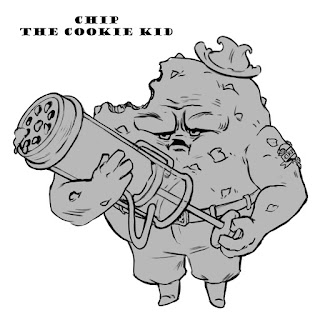 "Chip is one big cookie. He doesn’t remember how he got to Pastry Plains (that missing chunk isn’t doing him too many favors) but he does remember that he likes sugar and that he likes to shoot his massive pastry gun at bad guys. He doesn’t always remember who the bad guys are, though, so you might want to be careful around him. In spite of his intimidating appearance, Chip’s a bit of a soft cookie and likes when he gets to share bodyguard duty alongside Temperance Tart. He’s pretty sweet on her, and Temperance has a hard time being mad at him (surprisingly enough) so they make a good team. But seriously, if a gunfight breaks out with Chip there just yell “I’M A GOOD GUY” over and over." 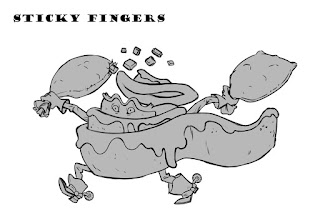 "Beneath the sweet crust of Pastry Plains there lies a hidden bittersweet core of villainy. In certain parts of town you must watch your step, for around shadowy corners lurk slippery assassins, crafty thieves, and dangerous criminals. Oh, and Sticky Fingers. Sticky Fingers is the world’s greatest thief… or so he says. It’s not his fault his perfect plans always seem to fail! It’s not like he forgets his stealin’ bag at home! Well, more than once or twice a week, at least. And how could he know that the bank locks its doors at night? He know he’d finally get his big payday if it wasn’t for that dang Sheriff Cher! She’s always showing up and ruining his day! Oh well, at least he can always count on Deputy Duncan fudging up the capture! That guy couldn’t catch a cold! Now… where did that stealin’ bag go?"

It was really fun creating this world and it was certainly a challenge getting 10 characters done in less than a week, but I am really happy with where they are heading. I plan to develop them further, paint them, and add some scenery paintings to my portfolio!

The time that I was not posting was needed and much deserved. In that time I have been making A LOT of art for work, and myself. Before I took this break, I started to lose sight of why I was making art so I really wanted to make work for me. This really worked for me! I will be posting every Thursday now, and it was great to refresh my love for art. 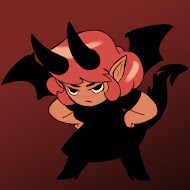 Hi, I'm Chelsea and I am a 2D artist. Please feel free to contact me!

You can support me by donating!

Hey folks! It's been a while, I know~ I have been super busy! Thanks for stickin' around though. ♥ I thought I would stop by and p... 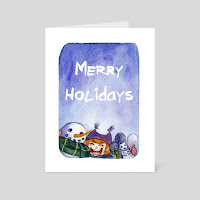